This’ll be the first piece from Pablo’s Kitchen. It was supposed to be an update to the last post but it went on a bit longer than I expected. Here it is.

A few weeks ago my brother got himself an iPad under the guise that our company needed to start developing for it. We will eventually, but for now it’s just a really cool toy. There’s one particular app called Epicurious that’s really helping me move through this experiment. I can pick what sort of dish, main ingredient, cuisine, etc. and it’ll come back with a bunch of recipes meeting those criteria.

I found an upscale version of beef stroganov that was exactly what I was in the mood for. My main problem with stroganov is usually the medium quality overcooked beef strips. Cut thin, they’re very hard to not overcook, so they end up being tough and tasteless. Replacing them with filet mignon seemed perfect.

I saved the recipe and hopped over to Amigos to do some shopping. I felt like a douche checking things off in the iPad, but I was sure that without it I would forget some key ingredient. I already had most of the pieces of this culinary puzzle, except for the egg noodles and the meat itself. The butcher at the supermarket seemed genuinely excited to prep the meat to my specs. It doesn’t look like they use his full services much at this particular shop, and as a man passionate for his art, he seems mostly disappointed, or at least that’s the story I made up for him.

They didn’t have any pre-cut tenderloin so I bought the smallest full piece there was.  At $17.50 for 7, inch and a half pieces I was alright with the price. Now this isn’t a cheap meal; between the brandy, the tenderloin, and everything else, a full 4 serving spread will run you about $50 bucks, on the other hand it’ll feed 4; 8 if you portion it like a restaurant. Try ordering a filet mignon dinner for 4 at a restaurant and let’s see how much that runs ya. Either way you’ll have left over brandy!

First, boil the water for the noodles. They didn’t have any egg noodles in my supermarket so I just went with fettuccini. The cooking time for everything else is about 20 minutes so you’ll want to get this part started first. I put some EVOO(I hate Rachel Ray but her abbreviation for Extra Virgin Olive Oil is very practical) and salt into the water, because that’s how my momma taught me to do it. Once that starts to boil I’ll throw the pasta in. On to the chopping block, half an onion, 3 garlic cloves and about half a pound of mushrooms, all thinly sliced. Don’t skimp on the mushrooms. Although the onions will carry a lot of the taste for the sauce the mushrooms will soak up everything and carry a lot of the sweeter flavors on to the plate.

As soon as I had gotten back from the supermarket (earlier in the day) I had seasoned my steaks with salt and pepper. The recipe calls for a specific amount, but I know how I like my steaks seasoned so the recipe can shove it. Poured in 2 eye measured tablespoons of EVOO onto my 12”, heavy, rooster-themed pan, and let that heat up on high heat.

Once the oil is hot, but not smoking, pat the steaks dry, and put them on your pan. You wanna dry them or the liquid on the steaks will basically fry the outside and overcook them. It’s very easy to overcook filet mignon, so just 3 and a half minutes on one side and 2 and a half on the other, for rare. Now if you don’t like the slap and plate (slap the cow and put ‘er on the plate [With Texan accent]) method, just wait about another minute and a half per side for medium.

I can’t warn against overcooking enough. These steaks taste incredible even completely raw, I chomped down on a small piece I cut off before cooking, and it was delicious. So if you can stomach rare I recommend it strongly.

With steaks finished, go back to the pan and throw in the onions and garlic. Move them around and make sure to scrape the hell out of the meat drippings, it’ll really add to the taste of the sauce. After about 3 minutes of this throw in the mushrooms and let them lose all their liquid, which should take about another 3 minutes.

Grab ½ a cup of brandy (I used Grand Marnier) throw half of it in the pan and the other half in a small glass with some ice. The Grand Marnier in the pan will evaporate in about the same time that it’ll take you to shoot the other ¼ cup in your iced glass. Once that’s gone, throw in the Worcestershire sauce and the beef broth, cover it up and let it boil for some 4 minutes. When the liquid is mostly gone take the pan off the heat, sprinkle in some salt and pepper to taste and fold in the sour cream. The recipe calls for a particular amount but fold in as much as you think you’d like, just don’t go overboard or you’ll kill the flavors in everything else.

By this point you should have pulled out the pasta. I like to shock it with some cold water to stop the cooking process and keep it at the right consistency. The pasta itself will be a bit less than warm but the sauce will be hot enough for the both of them.

Toss the sauce on the pasta but keep some left over for the steaks. Plate the pasta first and then lay the piece of meat on top of the bed of pasta for presentation, Drizzle some of the sauce onto the meat and garnish with whatever you’d like. If you don’t care about presentation just plate however you like, it’ll taste the same either way.

Things I would have done differently. The whole process takes about 20 minutes and you need to cook the meat first, since the drippings are part of the sauce. Unless you have a decent warming method (microwaves are NEVER decent warming methods) cook the meat slightly less than you like it and then toss it back on the pan after everything else is done for about 30 seconds per side to warm it up and finish it off. Then eat it.

I really can’t recommend this enough. The sauce will be creamy but the mushrooms will carry the original taste of the sauce before the sour cream was tossed in. The meat can be a meal all on its own. Since it has no fat or bone, it’s a hassle-free piece of deliciousness with every bite. I went vegan some years back but having this yesterday made me realize what a horrible mistake it would be to swear off meat forever. Alright so comments, suggestions, ideas, hate mail, down below. Thanks!

EDIT: This post was originally posted in La Acera about four years ago. The site’s current Head Honcho, sent it to me so I could post it here for posterity. Over the years I’ve noticed I’d had to clarify my views on the value of college, and this piece summarizes them rather well. Now on to the post…

Before I start, I want to tell a bit of my story because it brings some context into what I want to actually write about.

I spent 5 years, in 3 colleges, studying (in order) computer engineering, architecture, and PoliSci. Although I’m a better balanced renaissance man for it, my parents spent somewhere close to $20,000 for this unnecessary formation.

5 years ago my brother, some (now long lost) partners, and I, started our first company. We were idiots in the beginning and made tons of all sorts of mistakes. I remember that when we got our first client I stayed there at their office, after the closing meeting, waiting for my check.  Still, as the years came and went we: changed offices, changed partners, gained knowledge, got battle scars, and grew; considerably. Although we’re still a small company of just 5 we’ve been able to establish ourselves as experts in the field of Web Development, and have found clients who have decided to pay us handsomely for our expertise and follow through. At 28 I’m where ambitious people expect to be in their mid-30s. Not a single one of my chosen fields of study helps in any direct way my current profession.

The best thing I could have done was quitting school and getting to work. END_OF_DOCUMENT_TOKEN_TO_BE_REPLACED

Parties are part of the universal human experience. From invite only A-list soirees to convivial family dinners, everybody has been to one type of party or another. Some have been epic, some have been terrible, but one way or another we go to them often not knowing what to expect, hoping for the best.

So lets define what we’re talking about here. That big music festival everyone is going to? Not a party. Going to the Club? That’s not it either. No, no. That sort of event is the type of thing that companies take months to make happen; and if they’re spending the absurd amounts of money necessary for large events, they’re past any help this post could bring them.

Here, we’re talking about the sort of party you could throw. A relatively small event, with a list of invitees that usually doesn’t go past a hundred people, and mostly hovers around 30-40 guests. People usually wing these sorts of things, but a great party is a science.

Why are you throwing this party?

This is number one, A+, the most important thing you need to know. The intention of the party will help you make every other decision down the line. If it’s someone’s birthday, making that person happy throughout the event is your goal. Is it a networking party? Make sure that it’s the sort of thing where people can talk in a relaxed atmosphere. Are you just inviting a bunch of friends over? Prepare something that your sort of friends will specifically enjoy, something that the whole group can chill over. 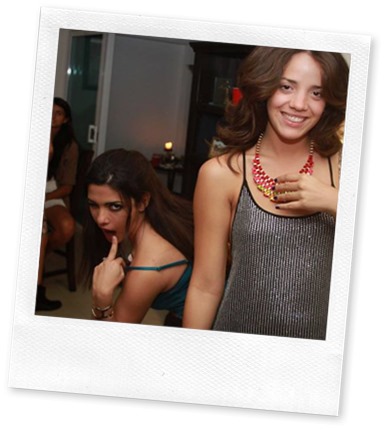 END_OF_DOCUMENT_TOKEN_TO_BE_REPLACED

Awesome stuff, from my head.